As we all know, Madame Tussauds is one of London’s favourite venues, so we have been there evenif this is not the first time :=)

This time we have taken a funny picture close the Usain Bolt. 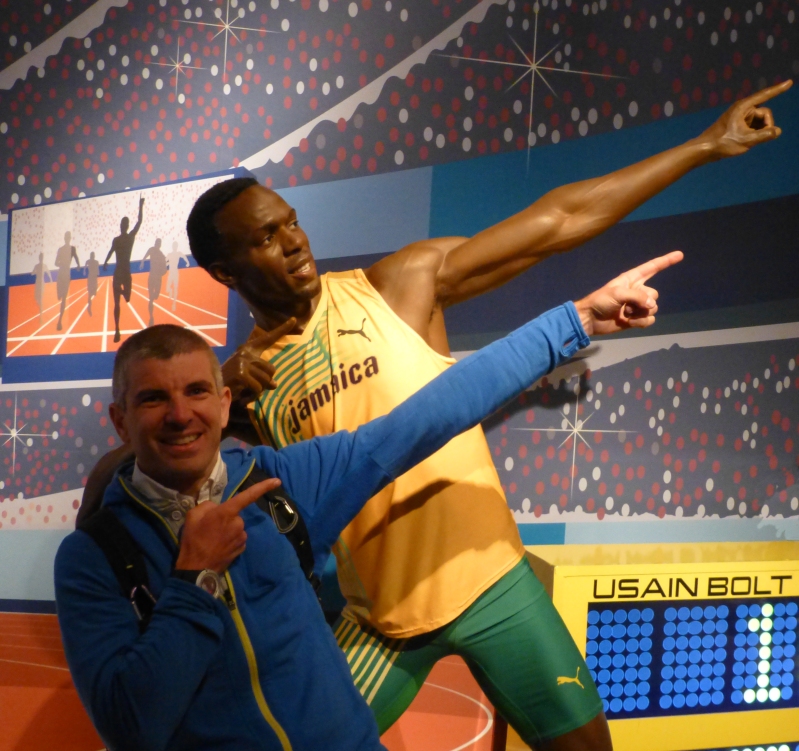 so close to the fastest man in the world, Usain Bolt!

After winning three gold medals and breaking three world records at the 2008 Olympic Games in Beijing, Usain Bolt shot to fame and became the first man in Olympic history to win both the 100m and 200m races in world record time.

Usain Bolt’s figure is portrayed in his famous “To Di World” pose and can be found in the Sport Zone!

1986: Usain Bolt born August 21st in Jamaica
1998: By the age of 12 Bolt had become the fastest runner at his school in the over 100m distance.
2001: Won his first annual high school championship medal in the 200m race
2002: Wom the 200m at World Junior Championships
2003: Won 4 gold medals at the Carifta Games
2004: Became the first junior sprinter to run 200m in under 20 seconds
2005: Won his first senior international silver medal at the IAAF World Cup
2007: Won silver medal at the World Championships
2008: Won 4 gold medals and broke 2 world records at the 2008 Summer Olympics
2009: Selected as the IAAF World Athlete of the year for a second year running
2011: Eliminated from the final of the World Championships for a false start
2012: Figure unveiled at Madame Tussauds London
2012: Wins gold in the Men’s 100m in the London 2012 Olympic Games and sets a new Olympic record with 9.58 seconds